How To Achieve Online Marketing Success In China

China is the most potentially lucrative market in the world, making it a major player in the realm of e-commerce. But to elevate your brand in China, marketing strategies must be tailored to its unique digital landscape. 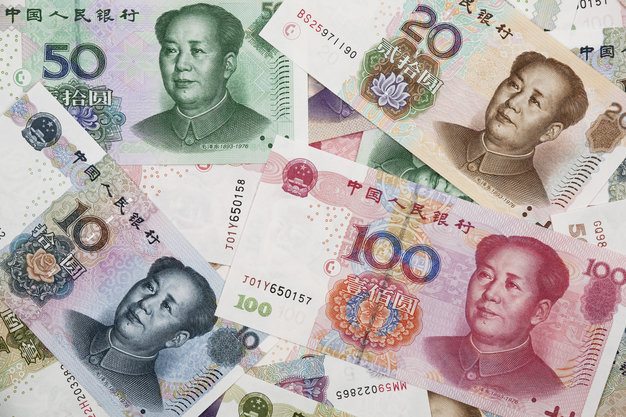 It’s no secret that China is the most lucrative market in the world. Its citizens make up almost one fifth of the global population and, as its economy and average salaries continue to grow, Chinese consumers have more disposable income to spend.

This makes China a major player in the realm of e-commerce. Its online market raked in $589.6 billion in total revenues in 2015, a figure that accounts for 40% of online global sales. Most importantly for businesses based in the western world, around 3 in 5 Chinese consumers purchase products from foreign businesses.

Unsurprisingly, targeting China is high on the priority list for many businesses. However, such a unique market requires an equally unique strategy.

The first and most crucial thing to understand about the Chinese digital landscape is that internet use is heavily regulated. In 2015, Google shut down its operations in China after coming to an impasse with Chinese authorities over censorship laws.

In Google’s place is Baidu, by far the most popular search engine in China with around 71.4% of the market share. Having a prominent Baidu presence is therefore key to infiltrating the Chinese market.

When it comes to optimising websites for Baidu, its algorithm and ranking factors are similar to those used by Google. However, Baidu’s algorithm is nowhere near as powerful meaning it takes much longer for SEO changes to influence visibility.

Because of this, paid search is often the most effective method of increasing visibility on Baidu. Search engine result pages (SERPs) are dominated by paid results which appear at the top, bottom and right-hand side, leaving little space for organic results to appear. 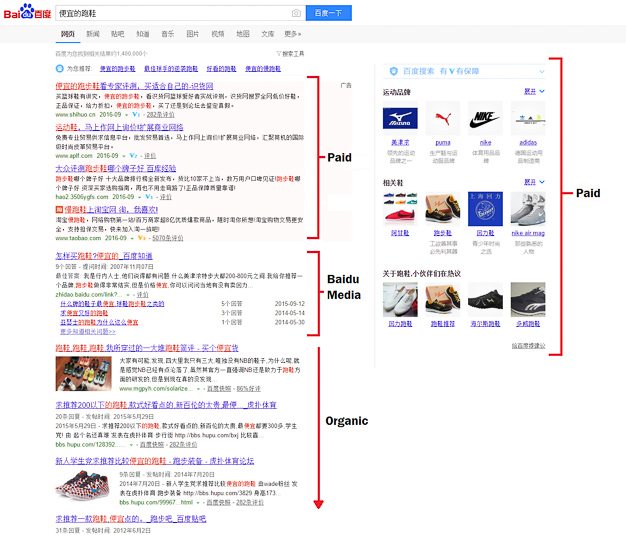 However, to use Baidu PPC, brands must complete a complicated advertiser certification process that requires extensive knowledge about local practices, language and procedure. Consequently, a strategy that combines organic optimisation and paid-for presence is more likely to give a brand the recognition it requires.

Shenma is changing the face of mobile search in China

After mobile search surpassed desktop in 2015, many businesses are aware that taking a mobile first approach to digital marketing is essential to future growth. This is particularly the case in China, where 688 million people use the internet—90% of which are regular mobile users.

Unlike Baidu, click through rates for paid results are extremely low on Shenma. According to research gathered by Nanjing Marketing Group, only 6.9% of Shenma-users actively clicked on a paid advertisement. Organic strategies are therefore more important when targeting mobile platforms in China.

WeChat is the king of Chinese social media

To really gain exposure in China, strategies that target search engines alone are not enough. The real gold mine of opportunity lies within social media and, in particular, the hugely popular platform WeChat.

The majority of mainstream western social platforms are blocked in the mainland, so WeChat has been China’s social app of choice for some time. Nonetheless, there’s nothing Facebook, Twitter and Instagram can do that WeChat can’t. In fact, WeChat is arguably the most complete app to have ever existed.

Having started out as a Whatsapp-style messaging platform, WeChat has expanded far beyond simply being a social tool. Now users can make in-store payments with the app, pay utility bills, check in for flights, find a hot date, book a taxi, buy cinema tickets, stream music, read the latest news, play games, make donations to charities—you name it, WeChat probably does it. Think of it as Facebook, Twitter, Instagram, Snapchat, WhatsApp, Spotify, Tinder, Uber, Paypal, Skyscanner and AirBnb all rolled into one.

With more than 700 million monthly active users, WeChat holds a larger potential audience than both Baidu and Shenma. Despite nearing saturation in its own domestic market, the app is also challenging long-established platforms in the west. After successfully expanding its services to several other emerging markets, WeChat is growing at a rate of 29% year-on-year.

Now we’ve established the platforms you should be targeting to grow brand awareness and traffic in China, you might be tempted to rush ahead with a tailored marketing strategy. However, to avoid instant failure or PR disaster, there are some key considerations that you need be aware of.

China is huge. It’s around the same size as Europe, with twice the amount of people. There are now more than 160 cities in China with a population of over 1 million, the majority of which are located along its east coast. Local search is therefore important, meaning you should aim to target a specific city or region rather than the country as a whole.

Google Analytics has a filter on geography feature that allows users to track data on website visits from individual countries. You can also track data from smaller geographical regions such as specific cities or states. Use this feature to establish whether people in China are already visiting the site and if so where they are located. This can help to specify your target market.

Discover where clicks to your website are coming from using the Google Analytics geography filter.

By clicking on a specific country, you can analyse where clicks are coming from within that country. This helps to select a specific target market.

There are more than 80 native languages in China. Mandarin is the most widely used of the Chinese languages and is considered to be a simplified version of traditional Cantonese.

However, Cantonese is spoken in the provinces of Hong Kong, Taiwan and Macau—all of which are major commercial markets. Furthermore, Cantonese is the prominent language in Guangzhou, the fourth largest city in China.

The concepts of good luck, bad luck and iconography are emotionally important to people in China. In order to maintain a positive brand image, it’s essential to avoid those with negative connotations.

Numbers hold extreme significance. For instance, the number 8 is considered to be lucky and symbolises wealth and prosperity. On the other hand, the number 4 is regarded as unlucky as the Mandarin word for “four” is similar to the word for “death”. Colours and animals also have connotations, so it’s important to become accustomed to these meanings before pushing out your brand in China.

We have come to prefer clean, easy-to-read website layouts that offer a seamless user experience. This is not the case in China, where websites can often appear to be cluttered, confused and filled with links. 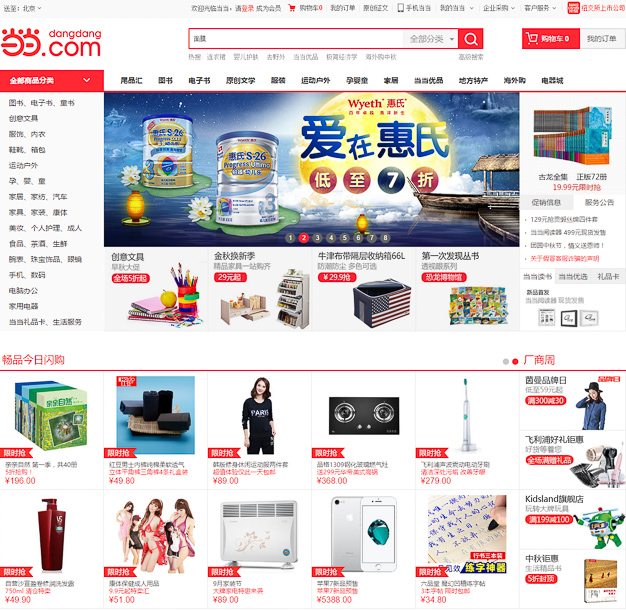 Chinese consumers prefer websites that are cluttered with plenty of products on view.

The chaotic appearance is completely intentional and it relates to how the Chinese engage with offline commerce. Chinese shops tend to be very busy with plenty of garish promotions, ads and free gifts. The general idea is that the more a store has on view, the more it has to offer. This has passed onto the world of e-commerce, where shoppers want to see as much as possible on the homepage.

David Wei, former CEO of Alibaba Group, and Yu Gang, chairman of online grocery store Yihaodian, said in a CNN interview that Chinese customers don’t like clean layouts used on websites like Amazon. Instead they want to have a chaotic bazaar type experience.

Another user experience factor to consider is loading speed. Websites that are tailored to a Chinese market but hosted in the UK or US can often take up to 30 seconds to load. Consequently, many website visitors will bounce before the page can even load.

Local hosting can improve loading speed, encouraging more visitors to stay engaged on the website. However, hosting in China requires ICP license, something that is fairly complicated to obtain. An alternative is to use a content delivery network (CDN) although this is not stable compared to local hosting.

It would be wrong to assume that your trademark is legally recognised in China. Apple found out the hard way earlier this year when it lost a legal battle regarding the name “iPhone”. As a result, a Chinese firm which sells phones cases and other leather goods can continue to sell products under the name “IPHONE”.

After investing lots of time and money into building the reputation of your company, it would be very damaging to your brand if another firm began sell their own products under your name. It’s therefore essential to register your trademark in China and protect your brand.

When translating your trademark into Mandarin or Cantonese, consider whether you want a literal translation of your international brand name or to tweak it to suit a Chinese audience. Be extremely careful of literal translations—KFC made Chinese consumers a bit apprehensive when “finger licking good” was translated as “eat your fingers off!”